David Muchui from Meru, posts about The BOMA Project:

A group of women guide their donkeys through the vast Kaisut Desert of Marsabit County laden with shop supplies bought from Korr trading centre miles away from their Manyatta where they are now operating kiosks.

At a Manyatta in Korr, another group of women is all smiles as they go through their record books and surrender part of the money earned in small businesses for saving in a Manyatta Bank.

This is a big contrast from the past when nomadic pastoralist women only engaged in domestic chores while being perceived of no value economically-it was a taboo for a woman to fend for the family.

While the men moved with livestock in search for greener pastures during droughts, women and children were left behind with only the weak animals and no source of income or food leading to immense suffering.

As a result, the constant droughts that ravage the northern parts of Kenya had turned most pastoralist communities into dependants of hand outs and relief food from the government and other humanitarian organizations that have heavy presence in the Arid and Semi Arid areas.

Gladly, this vicious cycle of living from hand to mouth among nomadic pastoralists is now being broken by a new initiative dubbed Manyatta banking courtesy of an NGO, Boma Project which is running a programme known as Rural Entrepreneur Access Project (REAP). 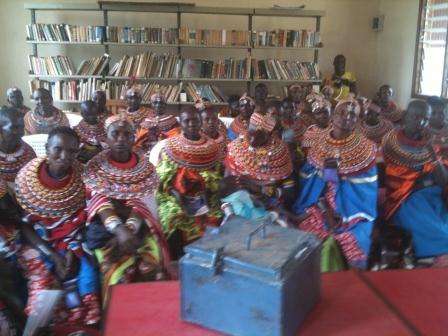 In the recent past, the banking industry has been growing and expanding tremendously in various parts of the country while coming up with ingenious products to appeal to Kenyans of all economic backgrounds.

However, the cut throat competition by SACCOs, Mobile money transfer services, Commercial banks and Deposit taking Micro-Finance institutions has not yet been felt in the lives of most pastoralist communities where the majority remains unbanked despite their riches in livestock.

The nearest commercial banks in these areas can only be found in Isiolo, Maralal and Marsabit towns which are as far as 200 kilometers from the villages where Manyatta banking is now taking root. Likewise, few of these areas have reliable mobile network hence mobile money transfer in these areas is still a pipe dream.

This is despite estimates from the Ministry of Agriculture, showing that Pastoralism accounts for about 10 percent of Kenya’s gross domestic product (GDP) and 95 percent of family income among pastoralists.

In Samburu and Marsabit Counties, tucking of money under the mattress is still a common practice which is mostly facilitated by the mobility of the pastoralists as well as in-accessibility of commercial banks save for the now vibrant micro-savings program that is revolutionizing the entrepreneurial and saving culture of  pastoralist women.

With a three lock metal box, the women who are teamed up in groups of three can now save their daily earnings and lend to members at a low interest.

“This initiative has brought life into our village. We had never imagined of saving money to the tune of Sh100 thousand. I am happy that we will no longer rely on relief food because we are the lenders,” says an overjoyed Amina Guyo.

BOMA Project provides seed capital and training on the establishment of savings associations which are made up of several REAP business groups for women in Marsabit and Samburu counties.

“We are very happy that we don’t have to wait for well wishers for food. We can afford to feed our children and take them to school even if there is drought. The small businesses have given us a new lease of life,” she says.

Women in Loiyangalani, Samburu, Marsabit, Laisamis and Archers post are a joyful lot after BOMA Project officers imparted them with the business skills and how to operate a village (Manyatta) bank for their groups.

The Women from Rendille, Samburu and Turkana communities which have been historical rivals over the culture of cattle rustling put aside their differences and work harmoniously in the REAP business groups to achieve a common goal-profits and savings.

According to Ahmed ‘Kura’ Omar, the Director of Operations at Boma Project, the program was initiated to alleviate the struggles of pastoralist women by replacing aid with sustainable income through small businesses.

“Whenever there is a drought, pastoralist communities are the most affected through loss of livestock. Most of the women relied on their husbands for food and other needs. This made it hard for women and children to cope after men left in search of water and pasture,” Ahmed says.

Under the REAP programme, Ahmed says that the women are organized in groups of three where they are trained in business skills, given a grant of Sh11, 500 to start small businesses under the guidance of a village mentor for two years.

“Once the three member group has established their business, they are provided with a lock box. Every member makes a specified contribution every month and the money is kept in the box. The box has three padlocks which means it can only be opened when all group members are together,” the director explains.

The beneficiaries of Boma Project are now running businesses ranging from village kiosks, butcheries, bakeries, tailoring and laundry, beading, fish mongering to petroleum products which are building a vibrant economy among the pastoralists.

“With the individual and group savings in the local lock boxes, the REAP business groups can lend to other community members during harsh times. We have launched over 900 businesses in Samburu, Laisamis, Loiyangalani and Marsabit Districts. We are now seeing a self reliant community in this region,” remarks Ahmed.

Women who were once reliant to portions of relief food now have no time to waste thinking about the next journey to aid centres to collect food rations, but how they will grow their new-found enterprises.

“Our lives are now much better and interesting because we have something to do and earn a living. It feels good to sit and plan on how to improve our business and increase the savings,” Gumato Lomurut, an entrepreneur says.

Following the improved livelihoods brought about by the women entrepreneurs, the once conservative men are giving up the age old beliefs that work against women.

“Men have now started doing away with strong cultural beliefs. They are appreciating their women because they are reducing the burden of fending for families. These roles were wholly left to men but now women have come in with a lot of energy,” John Lesas, a Village Mentor at Ngurunit, Laisamis says.

With some families having been deprived of livestock through the persistent droughts and raids by cattle rustlers, the Boma Project intends to train men on technical skills in mechanics, masonry and carpentry.

The resulting diverse economy among the pastoralists is expected to cushion them from the adverse effects of drought making them self reliant and entrepreneurs.

1 Response to A Blogger from Kenya Talks About BOMA